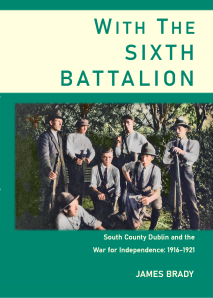 This is the story of Ireland’s War for Independence in south County Dublin. The attempts to secure independence from 1916 onwards are perhaps best understood as a patchwork of local conflicts. South County Dublin was affluent, often loyal and sometimes republican. Encompassing the southern suburbs of the capital as well as outlying towns and villages, this account provides a view into the conflict away from the classic centres that have often attracted most attention.

James Brady is a History and Politics graduate (UCD), although he now mostly works in sales with a broader interest in Irish history and local history. He is currently resident in Dún Laoghaire.

With the Sixth Battalion by James Brady

Order your copy now (to anywhere).